Six years ago I crossed the Alps. There I met the ultimate backpacker. He wore isolated shoes, two loose goatskin trouser legs, a hazel-framed backpack, a bow and arrows, a pouch with fire-making tools and a couple of birch bark food canisters. And an axe with a heavy and expensive copper axe-head. His name was Ötzi.

I asked him why he would take that heavy copper axe-head. In a soft voice he said: “the museum people thought it might have signified riches and leadership, but for myself, well, I just love it, as a tool. I don’t mind the weight penalty, chopping firewood with it is such a pleasure.”

Irrational additions to the backpack have existed for at least 5,000 years. These articles of faith define the walker. Show me yours and I’ll try and read them. But first:

What do I want from a walk, what are my articles of faith?

I want silence. The best thing in the wild is the huge big silence. My current stove, a White Box Stove, is completely silent. Why pick a nice spot for the tent, amidst this silent landscape, and then turn on a roaring jetboil? Calculating the weight penalty? I’ve tried, given up, and settled for it’s 53 gram (including windscreen)

I want simplicity of movement. I never fail to enjoy the sheer simplicity of walking. There’s many modern day ‘stuff’ that can ruin this simplicity. Think walking poles. They give your brain two extra legs to master (it can’t), they swing in and out of your view. Noise! On pole-people’s gear lists two or often three pairs of gloves turn up, because hands are exposed. While pole users have many a reason to use poles, I have only one counter-argument: poles are simplicity lost. A non negotiable to me.

I want to be immersed in the landscape. If I wouldn’t have any inhibitions, I would walk naked, and sleep on a bed of moss under the starry sky, eating rabbit each night. Until then, I prefer the thinnest barrier between me and the landscape, put up in a minute. And gone in a minute. This lightness is spoilt by having too much stuff inside the tent. Spare stuff annoys me. I don’t bring spare batteries, no pillow, a tiny towel (aaarghhh), less repair stuff, no shampoo, no swiss army knife, no spare socks, no spare shoelaces, no … you name it. This stufflessness is a dogma, and I thought I would suffer the consequences sooner or later, but I never feel something’s missing. Because so much is gained.

I need some comfort. Two items stand out: a book, and a thermos. For as long as I can remember I carry books. Lately, it’s an e-reader. But the purpose is the same: a book keeps me from walking into bad weather, and keeps me from walking at all if that’s what’s called for.
In a way, the thermos accompanies the alcohol stove. The stove is not lit quickly, and fuel, once poured in, can’t be re-used. So I boil one and a half liter of water two times a day. The thermos contains the surplus. Benefit: hot tea first thing in the morning, without setting up the stove, and a hot drink on the hill. Weight penalty: 189 g (e-reader + cable), 229 g (0,6 L thermos)

Safety. Of course I carry torch, compass and a foil blanket. But I have an irrational fear of high winds. When I was 10 or 11, the family camped on a French campground when one of those mediterranean winds struck our tents at night. Being inside a small tent with that storm hammering it made a lasting impression. My sister and I where ‘evacuated’ into the bigger tent my parents slept in. In Scotland I’ve had many a stormy night in my Phoenix Phreebooter, a bombproof tent. Recently, I bought a Tramplite tent, which stormproofness is overkill on most days, but it frees me from fear.
Weight penalty: about 200 grams (pegs!), compared to my Tarptent Moment.

The oddest and oldest relic in my pack is my spoon. Over 30 years old, and with me on all my Scottish walks. Weight penalty? Even calculating it would be heresy!

More posts on my preparation for the TGO Challenge here. 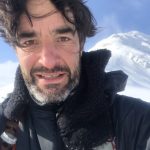